So it's been another two to three months, admittedly I haven't started.

I mean, I got the idea down, definitely, Roberia's gonna meet the sentry and tell him there's this alert thing going on, he then informs her there's a directive from Grand Duke Marlot to report to him directly, etc. It's there. But right now I'm doing something else for a bit. 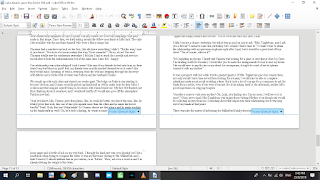 Don't get me wrong, I still love WoP Quest. It is, however, not helping very much since I wrote it with art in mind, not income & art.

I started work on a new series called Laila Awaits Upon The Ashen Hill, which will have its sequel(s) prepared and it has a more confined story without as much of the symbolisms and intricacies I use in WoP Quest.

So it's fundamentally a much easier book / story to write, and at the same time it'll be the primary project for a while. At least till I get it out on the market and let some income generate before I take it easy and focus on WoP Quest.

It's still my opus magnum, it's still my proudest work, so don't worry about it. WoP is still being developed as I type, I'm thinking up interesting scenes and insights to squeeze into this behemoth of a franchise. Who knows? Maybe I'll introduce a cross-over kinda thing between LAutAH and WoP.

So my time's limited, I'm old now and I gotta keep writing. Haha. Till the next time.

Signing off,
Cozy
Posted by Unknown at 00:49 No comments: